April 25, the wedding of Salma Hayek and Francois-Henri Pinault was held in Venice 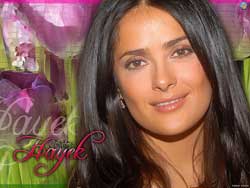 Wedding is one of the most important events in the life of any person. That is why everyone who has decided to get married tries to make it unforgettable. The ideal place to celebrate the wedding is beautiful and mysterious Venice, one of the most romantic cities in the world.

Famous Hollywood actress Salma Hayek also did not resist the charms of a wonderful city. April 25, she married a French businessman Francois-Henri Pinault. Francois is the head of a major holding company PPR, and according to some estimates his fortune exceeds $ 15 billion.

To the wedding final Salma and Francois went for a few years. In September 2007, in Los Angeles Salma gave birth to daughter of Francois, Valentina Paloma Pinault. However, after nearly a year happy parents denounced their betrothal. In autumn 2008, Salma came to Paris at the fashion shows, and a couple reunited.

In Venice, Salma was married to her husband for a second time, as the official ceremony of their union was held in Paris on 14 February at St. Valentine's Day. In February, lovers had modestly registered their marriage, but in April held a grand celebration for family and friends. Salma Hayek wanted a magnificent wedding, and it is clear that the newlyweds hadn’t spared the funds for its organization.

The wedding took place at the famous opera house La Fenice. In a beautiful wedding dress from Balenciaga and with a bouquet of delicate white orchids the bride was irresistible. Near the newlyweds was their daughter, Valentina Paloma, and children of the husband from a previous marriage, daughter Matilda and his son Francois.

The wedding was attended by over 150 guests. Many stars arrived in Venice to share with Salma and Francois such a joyful event. Among them were Stuart Townsend and Sharliz Theron, Edward Norton, Woody Harrelson and his wife, Penelope Cruz, a famous film director Emir Kusturica, designer Stella McCartney, the former French President Jacques Chirac and many others.

Before the wedding the guest was given a masked ball, held at the villa Punta Della Dogana (formerly building of maritime customs of XVII century). The next day, the celebration continued in the Venetian restaurant. And on Saturday, April 25, after the wedding a banquet was held in the opera house La Fenice. And, of course, there was organized a drive in the Venetian gondolas.

Have Salma Hayek and Francois-Henri Pinault long and happy life together!