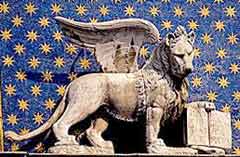 Venice in the history was mostly associated with the Republic of Venice. The region was given to Austria in the late 18th century in the framework of the peace of Campo Formio. After Austria's defeat by Napoleon and the subsequent further peace treaty of 1805, the province became a part of the Kingdom of Italy. The Congress of Vienna made Venice again the part of Austria 10 years later. In 1867, Venice finally fell into the hands of the Kingdom of Italy. Geographically, the region of Venice bounds with Austria, South Tyrol and Lombardy. In the east of the region are located magnificent beaches on Lake Garda. Geographically, the province of Venice has a lot to offer, because it is the Dolomites and Alps, which, with their beautiful mountains and beautiful nature, invite for a vacation trip in romantic holiday houses. On the east bank of the well-known and very popular Garda Lake a guest can rest with all his soul and body.

The cultural centre of the Venetian region is certainly located in the two cities of Venice and Verona. Venice has long been one of the most popular tourist destinations in Europe. It is famous mainly for its special position on the water and its turbulent history. This is the place where countless works of arts and exciting architecture arise from the past. And of course, it’s carnival. Couples are looking for love and enjoying their happy honeymoon in cozy apartments here. The meaning of Verona as a powerful political and economic center is still witnessed by some monuments, beginning with arena and up to the Roman theatre, Gavi bow and the Porta Borsari, with the excavation area of Portadown Leoni and the Scavi Scaligeri.