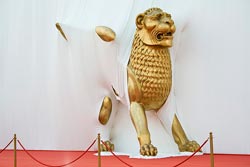 The Golden Lion is the main Venice Film Festival award

On September 2 2009 on the island of Lido will be opened the 66th International Venice Film Festival, which will be held at the Palazzo del Cinema. Venice Film Festival is a very important event in the world of film industry, so during it on Lido will gather the world's movie stars, famous directors, film critics and the whole world will follow all the events of the famous film festival.

In 2009, in the main competition will be involved 23 world premieres. The jury consists of seven people. The decision about who will hold the «Golden Lion» and other awards of the main program will be made by the Taiwanese filmmaker Ang Lee, who is the owner of two «Golden Lions», director Sergei Bodrov from Russia, Italian composer, actor and director Luciano Ligabue, director Liliana Cavani from Italy, a popular French actress Sandrine Bonnaire, who received the prize «Osella» for Best Actress in 1995, director Joe Dante from the United States of America, famous for the film «Gremlins» and Anurag Kashyap from India. The chairman of the jury is declared to be Ang Lee.

Opening of the Venice Film Festival will be held on Wednesday September 2 at 19.00 with the showing of the Italian film «Baaria» directed by Giuseppe Tornatore. The film tells the life story of several generations of Sicilian family. The main role is played by Margaret Madé and Francesco Sheehan. In «Baaria» played such well-known actors like Monica Bellucci and Michele Placido. Get to the opening of the film festival will be able only happy owners of the invitations.

In the non-competition program for the jury will be brought a film of Steven Soderbergh «The Informant!» with Matt Damon in the main role, a film by Oliver Stone «South of the Border», «The Hole» by Joe Dante, «Brooklyn's Finest» by Antoine Fuqua with Richard Gear and others.
In 2009 appeared a new nomination for the best 3D movie. In 3D format are shown two parts of the cartoon «Toy Story». Their premiere will be held on September 6.

The program «Horizons» of 66th Venice Film Festival will include some Russian films: «Reading book of blockade» by director Alexander Sokurov, «Short circuit» by Peter Buslova, Boris Khlebnikov, Ivan Vyrypaeva, Kirill Serebrennikov and Alexei Herman Jr. In the competition of short films will be shown the film «Object ā  1» by Murad Ibragimbekov.

Awards Ceremony of 66th International Venice Film Festival will be held on September 12. The famous film festival will be closed by the premiere on Lido of Chinese movie «Chengdu, I love you».

Here you can book your accommodation for visiting Venice Film Festival.