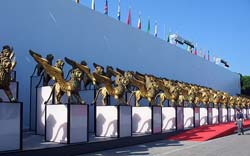 International Venice Film Festival (Mostra Internazionale d'Arte Cinematografica) is the first and the oldest among all the world's film festivals. It is certainly a very significant event in the field of cinematography.

Film festival in Venice in 1932 was not a competition and there were no awards for the submitted films. In August 1934 was held the second film festival with an already competitive nature. It was attended by 19 countries. For the best Italian film and best foreign film was given the Mussolini Cup, named in honor of the Italian Prime Minister Benito Mussolini. Cup was handed over to the winner by the president on the basis of opinions of Biennale’s experts and spectators. Since 1934, it has been held every year in late August - early September on the island of Lido at Palazzo del Cinema. In 1949 the main prize for best film was renamed into the «Golden Lion».

In the history of the Venice Film Festival there are four producers who hold two «Golden Lions». The film directed by Ang Lee «Brokeback Mountain» won the top prize in 2005, and in 2007 he became the winner with his work «Lust». Movies «No one should be lost» in 1992 and «Tsyutszyu goes to court» in 1999 brought the victory at the Venice Film Festival to the Chinese film director Zhang Yimou. In 1980 and 1987 winner of the «Golden Lion» prize was Louis Malle presenting to the competition such films as «Atlantic City» and «Goodbye, children». The fourth owner of two «Golden Lions» is the French director Andre Kayat. In 1950 his film «Justice will be done» and in 1960 the film «Crossing the Rhine» were recognized to be the best.

The program consists of the main film festival competition, the program «Horizons», short film competition and single-source display.
In the main competition are involved about 20 world premieres, selected by the group of experts headed by the director of the film festival. These movies were not previously broadcasted. The jury consists of representatives of the film industry of various countries in the number of 7 - 8 people. The film that is adjudged as the best gets the «Golden Lion». The winner in the nomination «Best Director» will be awarded by the «Silver Lion». For the best male and female actors' work is presented Coppa Volpi, the best screenplay and technological advances are awarded with Prize Osella, for the best young singer male or female role Marcello Mastroianni prize is awarded. Also is awarded a special jury prize for the contribution to the cinema.

In the «Horizons» competition take part documentary and fiction films, which use a variety of new directions in cinema. In the non-competition screening program are viewed the year’s best films.

There is a prize of Luigi De Laurentis, which is received by one of the debut films presented in the main competition in the category of independent films.

Over the time some rules are changed and new nominations are added. For example, in 2007 came the prize «The Blue Lion», which is awarded to the best film on homosexual themes. In 2009 was introduced a nomination for the best 3D movie.

To date, the international Venice Film Festival director is Marco Muller. In 2009 it will be held in the 66th time.